An introduction to Park Rules

Site rules ensure that acceptable standards are maintained on the park site for the general benefit of occupiers. They are intended to promote community cohesion on the park site.

Please be aware that there is no legal obligation to introduce site rules about the running of a park site. However, if a site owner chooses to do so, a strict procedure must be followed. Such prescribed procedure can be found in the Mobile Homes Site Rule Regulations (“the Regulations”).

If the site rules procedure prescribed by the Regulations has been adhered to, the site owner must register and/or deposit the site rules with the local authority.

It is important to note that the local authority retains a register of the site rules which is open to members of the public during normal working hours and they must also publish these online. If the process has not been followed and the site rules have not been deposited as outlined in the Regulations, the site rules are not enforceable.

Following the Regulations, there are certain rules that are banned and all existing rules which have been banned have no legal effect. Examples of these include rules:

(a) which grant home owners certain rights, subject to the exercise of discretion by the site owner;

(b) about any matter that would contravene the implied terms of a home owner’s pitch agreement under the 1983 Act;

(c) which restrict a home owner from obtaining goods and services, for example, bottled gas;

(e) which restrict home owners’ rights over the site, such as in relation to visitors and vehicular access.

It is really important that the site rules are fully understood before purchasing your park home, so as to not fall foul of them in the future. Should you have any doubts as to the validity and/or the implications you should seek specific legal advice from a qualified lawyer that deals with park homes law.

If you are looking to understand the legal validity of the site rules on your park home site or need legal advice when buying a park home, you are able to seek a free quote by visiting www.parkhomeslaw.com and ask Ibraheem to contact you.

The information provided in this article serves as useful guidance. Please note that this is not intended to be comprehensive and should not be taken in place of specific legal advice. If in doubt, you could seek specific advice from Ibraheem Dulmeer, who specialises in this area of law. This material should not be replicated without the author’s consent. Ibraheem Dulmeer © 2020 - 2021 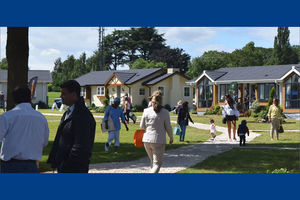 The World of Park and Leisure Home Show